With the ongoing switch to renewable energy, came the demand for new energy storage systems. While lithium-ion batteries were and still are the mainstream batteries for portable applications, at the moment there is a quest for more efficient, higher energy batteries. Besides new lithium based chemistries, like lithium-air and lithium-sulfur, other metal have attracted attention of the researchers. Lithium is comparatively rare element on Earth, and only few countries hold a majority of its´ supply, making this element quite expensive. On contrast, elements like sodium, potassium, magnesium, aluminium are much more abundant and hence there is cheaper uninterrupted supply that can cover the world demand.

Aluminium is most abundant metal in the Earth crust. The low price of aluminium, combined with high theoretical capacity and increased safety due to low reactivity, made it an attractive candidate for battery anodes. Aluminium based primary batteries are known for a while, however the dream of secondary batteries was unattainable for a long time: due to electrochemical potential of Al, the deposition of aluminium is impossible in aqueous systems. Hence secondary aluminium based batteries appeared only with the development of non-aqueous electrolytes, which also goes hand-in-hand with the development of aluminium deposition from ionic liquids. Furthermore, organic solvent-based electrolytes either have low solubility of strongly-charged aluminium species, or in case when solubility is high, aluminium ions are strongly solvated and therefore big overpotential is required for deposition of aluminium from these systems.

Chloroaluminate ionic liquids, on the other hand, proved themselves as excellent solvent systems for aluminium deposition, and with that opened way to rechargeable aluminium batteries. As they are

they allow aluminium deposition and stripping at room temperature. In order for this process to work, IL should be “acidic”, so the ratio between AlCl3 and IL chloride, e.g. EMIM Cl, should be above 1, with 1.3 being most used in battery research. That ensures the presence of Al2Cl7 - species in the mixture, which is required for stripping and deposition, as seen on the scheme 1.

Normally Al batteries make use of aluminium metal as anode and IL as electrolyte. There are various possibilities for cathodes. As Al3+ has very high charge density, the battery that makes use of its intercalation would have high energy density. But intercalation of Al3+ is only possible for layered metal oxide/sulfide cathode, but the capacity faded very fast.[1] Intercalation of AlCl4 – on the other hand proceeds quite readily, given that the cathode material has flexible enough structure to accommodate quite big ions. This way, graphite was shown to be useful as cathode material (see scheme 1, top right).[2] Polypyrene, a polyaromatic structure, also allowed for rechargeable battery.[3] Interestingly, polymerized material enabled easier AlCl4 – intercalation, that crystalline pyrene, probably due to bigger space between aromatic sheets.

Another cheap and abundant cathode material is sulfur. It has been shown that ILs can suppress polysulfide shuttle. Initially, aluminium sulfur batteries stumbled upon the problem, that prior to the reaction on the cathode, Al-species should be stripped of chloride – which is an energetically demanding reaction. It was been found, though, that by changing one of the chloride to bromide, as e.g. in Cl3Al-Br-AlCl3-,[4] more favourable dissociation occurs giving rise to the operating aluminium-sulfur battery, as depicted in scheme 1, middle right. The electrolyte for the battery can be prepared by simply using EMIM Br or BMPip Br, rather than EMIM Cl for the reaction with AlCl3. 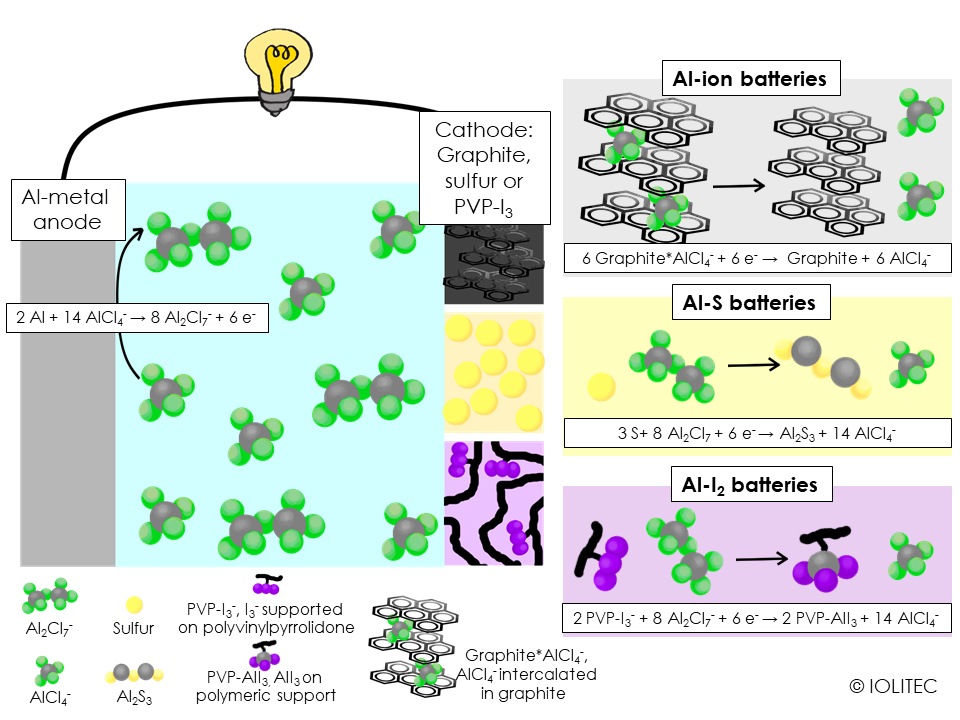 Finally, it has been demonstrated, that aluminium-iodine battery is also possible. Often, when iodine is used as a part of cathode, polyiodide shuttle, a process similar to polysulfide shuttle operating in metal-sulfur batteries, takes place, leading to the fast capacity fading. This problem can be circumvented, if polyvinylpyrrolidone is used as the cathode material. It forms hydrogen-bonds with thiiodide, effectively trapping it within the cathode: this still allows for AlI3 formation, while prevents polyiodide shuttle, and results in the battery stable for 150 cycles.[5]