Generally speaking, Li-S batteries consist of lithium anode, where Li oxidation occurs with the formation of Li+ ions that are diffusing through lithium-conducting electrolyte towards cathode. On cathode, reduction of sulfur happens (Scheme 2). 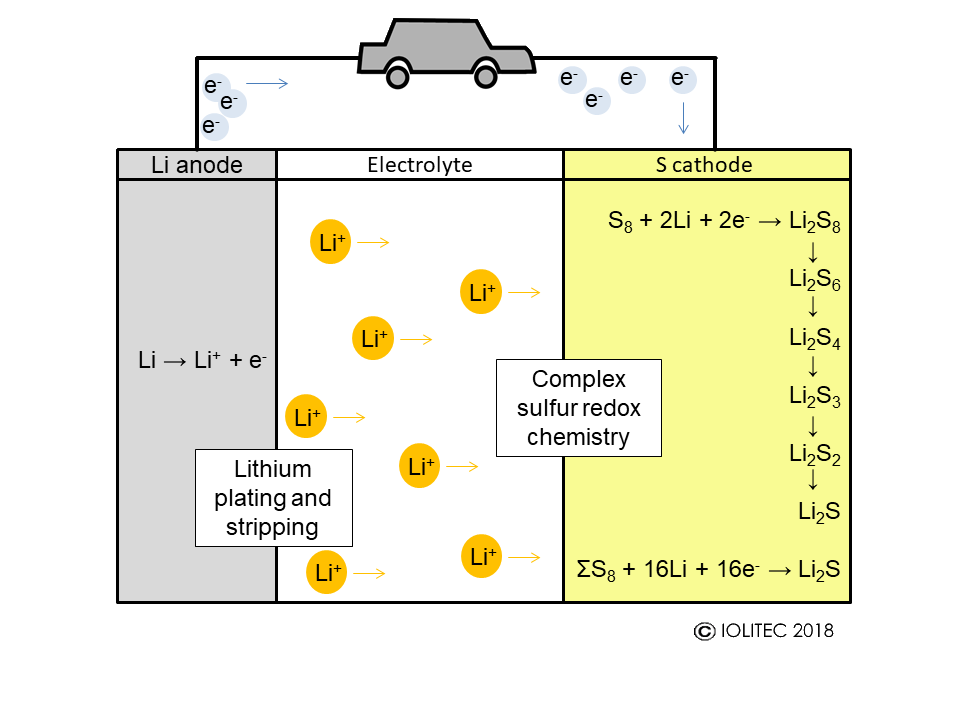 The problem is that reduction of sulfur proceeds via complicated multi-step mechanism and a variety of intermediate polysulfides of the general formula Li2Sn are formed. The polarity of those sulfur compounds varies widely with sulfur being non-polar and Li2S, the terminal species, being polar. The polysulfides however are of intermediate polarity and often quite well soluble in electrolytes. The dissolution of polysulfides depletes electrodes from active materials. Furthermore, when polysulfide diffuse into electrolyte, they can easily travel between cathode and anode and instead of useful oxidation and reduction cycles, parasitic reduction and oxidation of intermediate polysulfides occurs on electrodes, resulting in above mentioned capacity fading. Lastly, if Li2S is formed at anode, it tends to form insoluble layer and therefore to block lithium transport (Scheme 3).

The solubility of polysulfides in ionic liquids depends most of all on donor properties of IL anions. Accordingly, ILs with OTf- as anion dissolves polysulfides quite well, whereas BTA- containing ILs have neglible polysulfide solubilizing power.[1] On the other hand, BF4- counterion tends to react with polysulfides and therefore does not bring advantage. In this context, EMIM BTA, BMPyrr BTA, PMPyrr BTA and PMPip BTA have been identified as most successful candidates for Li-S battery electrolytes.

Due to high potential of Li-S batteries, IOLITEC is currently involved into a few research projects on this topic. If you are interested in application of ILs as electrolytes, please contact us.