Application of ionic liquids as lubricants

A model of the processes between rubbing surfaces is given in Figure 1. The lubricating oil has the function to minimize the friction between the construction parts and to reduce the wearing of the surfaces. 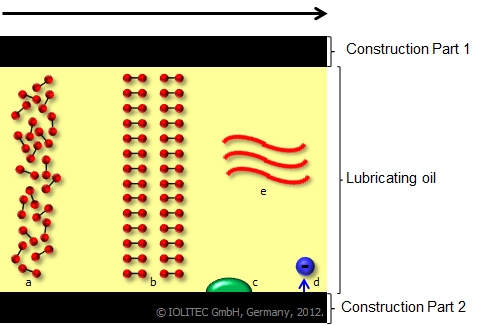 Figure 1: Model of the friction between two surfaces (a: Bond scission by shearing, b: orientation of the molecules, c: activity of nascent surface, d: exo-electron, e: friction heat).

Interesting applications for ionic liquids are special lubricants for high vacuum or extreme temperature applications.[5] Ionic liquids can i.e. reduce wear and friction in lubricating an engine piston ring against a flat in comparison to 15W40 diesel engine oil.[6]

IOLITEC is one of the world’s leading providers of ionic liquids. We offer a selection of ionic liquids, which can be used as neat lubricants. IOLITECs ionic liquids are characterized by high quality and purity, which is ensured by a constant optimization of our quality control. In addition, we are a very flexible company which reacts fast on our customers’ needs. Please contact us if you are interested in ionic liquids or their application as lubricants. We will be pleased to answer your questions and to help you by choosing the right ionic liquids for your application. We also offer custom syntheses of ionic liquids which you cannot find in our product catalog.