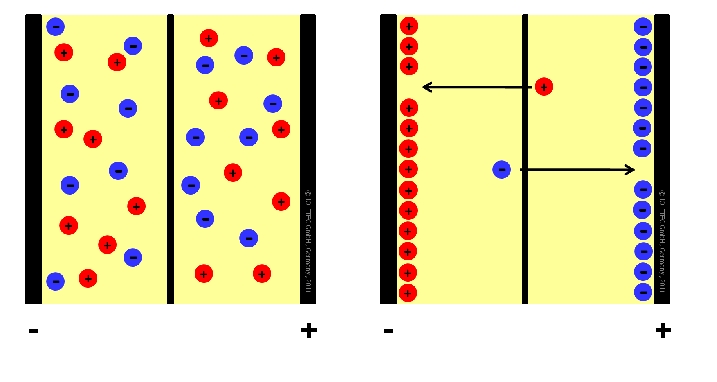 Ionic Liquids are very similar to the commonly used tetraalkylammonium salts from a chemical and structural standpoint, but have the advantage of a much lower melting point. Therefore, they do not require  addition of volatile solvent, like acetonitrile or ethylene- or propylencarbonate, to be liquid over a wide range of temperatures. Operating conditions for ionic liquids can easily be in the range from -35°C bis 250°C. In addition, ionic liquids typically do not have a significant vapor pressure in this temperature range and are not flammable.

Other important aspects for the application in EDLCs are the interesting electrochemical properties of ionic liquids:

The higher the electrical conductivity the faster the capacitor can be charged and dis-charged.

A number of publications describe the successful use of ionic liquids in EDLCs. [i] Electrolytes based on ionic liquids might offer major advantages for future developments, especially with respect to energy density and safety aspects.

Due to their fascinating properties, carbon nanotubes (CNTs) have made their way into many different applications since their discovery by Iijimi et al.[ii] The cylindrical nanostructure of two dimensional graphite provides a large p-electron surface and at the same time uniform pores on the nanometer scale. As a consequence, CNTs represent perfect electron conductors and porous materials that can be used in various energy storage systems such as Li-ion batteries, capacitors or fuel cells, as electrode materials.

Another interesting aspect is the combination of ionic liquids and CNTs, which can form so called “bucky gels”. In these gels the CNTs form bundles with a crosslinked structure[iii].

Watanabe et al. showed that these gels can successfully be applied to EDLCs as electrode materials. The specific surface area of the CNT gel electrodes of 654 m2×g-1 was significantly larger than that of conventional carbon electrodes, which had a positive influence on the capacity and led to a reduction of the electrode resistance. [iv]