For decades, humankind is not limited to the exploration of our own planet, but reaches our far into the space. Scientists all over the world every day try to push our barrier of knowledge further and further. To enable it, cutting-edge technologies are needed. Can ionic liquids provide opportunities to improve on the current technologies that allow us to explore the space?

As soon as we travel away from Earth, we find ourselves in very extreme conditions. Lack of oxygen, very low pressures, extreme variations of temperatures, ionizing radiation, highly reactive species, dust… in order to survive we need sophisticated equipment that protects form the dangerous environment and is able to support research. And that all after the safe launch from the Earth. 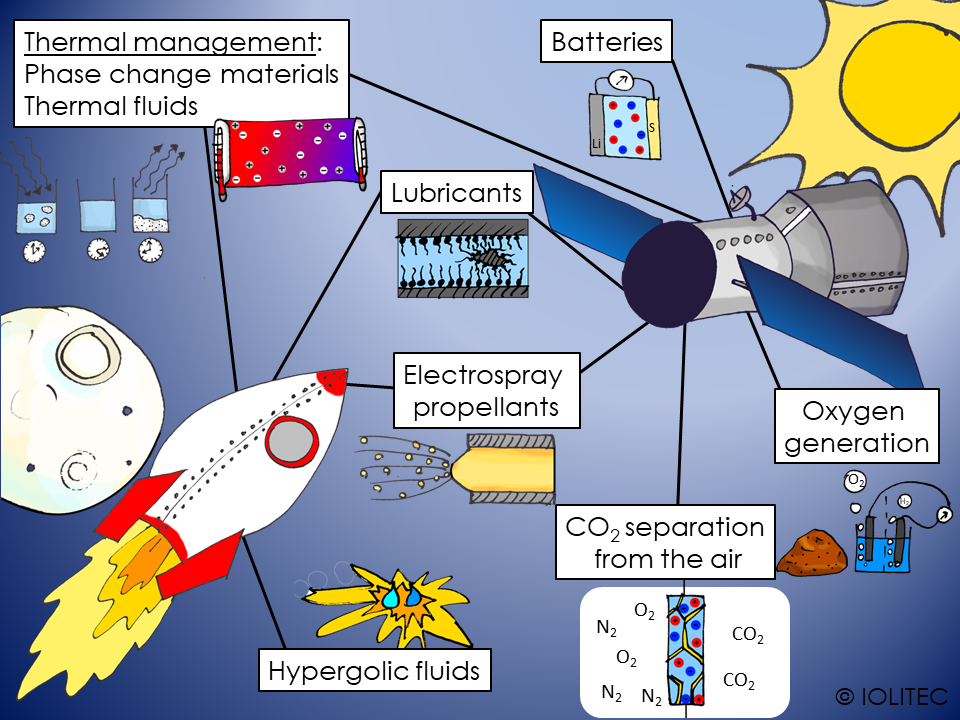 Ionic liquids have been researched for applications in some space technologies, so let´s have look at what we can achieve.

Propellants for the spacecrafts

The first challenge would be to get into space. For that, fuel is needed. One of the ways to propel the spacecraft is to use hypergolic fluids. Those are highly energetic materials, that, when mixed with oxidant, will ignite spontaneously. ILs can be used as hypergolic fluids, and have following advantages

In particular, ILs with dicyanamide as anion showed themselves useful as hypergolic fluids.[1] Furthermore, considering high solubilizing power of ILs, they can be used in the mixtures with other high-energy materials. For example boranes were used together with BMIM BF4, BMIM DCA and BMPyrr DCA, to further increase their performance as propellants and possibly outperform current hydrazine-based systems.[2]

Electrospray thrusters are another type of engine, used in space travelling. While considerably less powerful, it is very precise and efficient, and used either for small satellites or as way of high-precision adjusting of the bigger space crafts. The propelling is achieved by the effect of a conductive liquid in electric field forming a spray. Classically liquid metals are used for this purpose. However, modern ionic liquid offer great opportunities, as they:

The problem that was first hindering the use of IL for electrospray propulsion is that during electrospray formation, either only cations or only anions would be sprayed. The remaining ions would participate in electrochemical reactions, damaging the equipment. This can be nowadays avoided by alteration of polarity of the fields, leading to usage of both ions. Several ILs, including EMIM BTA, EMIM DCA, EMIM TCM and EAN have shown good performance as colloidal propellants.[3] Interestingly, ILs were proposed to be used as electrospray propellants for investigation of gravitational waves.

Different energy sources are utilized for ensuring the correct operation of equipment on board of the spacecraft. At the moment, lithium-sulphur batteries are investigated for space applications due to their light weight. They can be coupled very efficiently with solar panels, allowing slow charging, when on the sunlight, and discharge during dark hours.

Thermal regulation in the spacecraft

The temperature in space can vary easily from -100 ⁰C to 50 ⁰C between “night” and “day”. Human cannot survive in such conditions, and even for unmanned spacecraft, temperature regulation is required to ensure correct functioning of equipment. Thermal fluids can be used to transfer excess heat from one place and release it to another. As ILs have high thermal stability, wide liquid range, ultra-low vapour pressure and can have high heat capacity, they can be used as thermal or heat transfer fluids. Further possibilities are envisioned in the field of nanofluids, or dispersions of nanomaterials in ILs.

Another option for heat management is the use of phase change materials, that can absorb energy and turn from solid to liquid, store energy in liquid state and further release it upon solidification. HexadecMIM Br seems to be promising candidate for this application.[4] More information on this topic can be found no our web-site.

In order for the team to survive in the spacecraft, air and water quality have to be kept high enough. Therefore, highly efficient purification and regeneration systems are required.

Carbon dioxide, dust, microorganisms, excess humidity have to be removed from air, at the same time, oxygen level should be restored and nitrogen level kept constant. As ionic liquids are widely researched for removal of CO2 from the gas mixtures, they can also be used for air quality management in space. Especially, when used as a part of supported ionic liquid membranes (SILM), their ultra-low vapour pressure is a big advantage, as it allows for evacuation of the waste CO2 directly into space. Same property also allows avoiding air contamination inside the spacecraft.

To avoid transport of big amounts of oxygen into space, it is an option to generate oxygen on-demand in the space. Water electrolysis can be used for that purpose. Alternatively, it can be produces from oxygen-containing species, like SiO2 or metal oxides from the surface of Mars or Moon. It has been shown, that IL/phosphoric acid mixtures can dissolve those oxides quite efficiently, forming metal phosphates and water at comparatively low temperatures. The water then can be used for oxygen production.[5] As Martian atmosphere consists mainly of CO2, it has been proposed to use it for oxygen generation via Sabatier process. CO should be separated before, which can be achieved by use of catalytic membrane for water-gas shift reaction using BMIM OTf and Ru catalyst.[6]

During operation in extreme conditions, as high temperatures, free-radical containing environments, powerful vibrations, cosmic dust, high wear and welding of metal surfaces can occur. Maintenance in space, on the other hand is difficult and costly. These problems can be avoided by using high performing lubricants. Ionic liquids look like lubricants of choice for applications in space, as they possess:

Hopefully, many more ILs will be tested for such exciting applications as aerospace and extra-terrestrial missions. If you require any further information or want to discuss applications of ILs for your needs, please do not hesitate to contact us.